For 12 years, animal trainer Samantha Martin has been entertaining crowds with The Amazing Acro-Cats - a group of common house cats that jump through hoops, play musical instruments and even ride skateboards!

Since cats are known to do whatever they want, training multiple felines to partake in these activities is impressive in itself. But on top of that, the circus has helped save the lives of more than 200 kittens.

The Acro-Cats travel from city to city, performing their amazing tricks and educating audiences on the importance of rescuing animals. Martin and the other human team members have fostered an estimated 209 kittens, most of which have found new permanent homes. 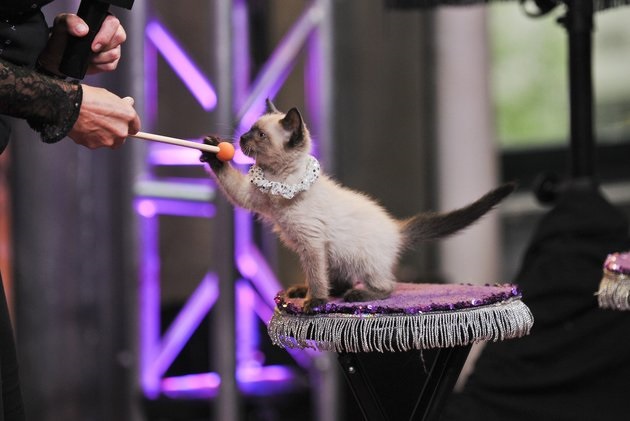 Some of these rescued cats have wound up sticking around to become performers. So as well as finding new homes for cats in need, the actual stars of the show are former orphans, rescues and strays themselves.

The kittens reside in a deluxe three-level space inside a specially outfitted cat bus. There are 17 cats currently in the circus, 16 performers and an old timer named "Captain Patch", a one-eyed bundle of joy who just hangs out on tour.

In January this year, Acro-Cats star kitty Tuna sadly died of cancer. Tuna was the original Kitty Ambassador, the cat who demonstrated to everyone the intelligence and depth that all cats are capable of.

Samantha's original inspiration for her shows, Tuna showed the world that cats can be trained so problems can be solved in ways other than abandonment. Despite the sad loss, the shows are still going strong, and the misson of helping house abandoned cats is continuing.

View the Acro-Cats in action